Did you know “they” say you are supposed to try some thing your babies don’t like 12 times before giving up? I mean, apparently you are. I read it online like 50 different times, so I can’t tell you who “they” are, just that a lot of parents have apparently read this fact. Now, I’m just about 100% certain that by the 12th  time the twins see the green beans they don’t want, they aren’t thinking, “OH WOW check out these green sticks, let me try them again!!!” They are thinking, “Oh what’s that swear word mom uses? Fuck, yeah that one. She isn’t going to stop feeding this to me is she? I might as well give in. I’m going to have to try and say that word later too. ”

Now, I might be wrong, I mean, I probably am. I actually totally get the point this article is trying to make. My husband and I often muse about how different we eat now that we are parents. I don’t love brussel sprouts, but I will eat them. But give me a brussel sprout that is shredded and I would never know it’s the little ball of evil I choke down to make my husband happy. And I cook with so many veggies that I LOVE, that I never really enjoyed much as a kid. But I think that’s partly because my parents generation was the, ‘boil it till there are no more vitamins left in green bean anyway’ generation. And no body likes that.

So in my parenting adventures I have found a few ways that my kids will eat any thing and every thing I lay before them. That doesn’t involve my hard work and effort being flug on the floor for the 12th time, as they still decide they don’t like it. But rest assured, I tried that method too. 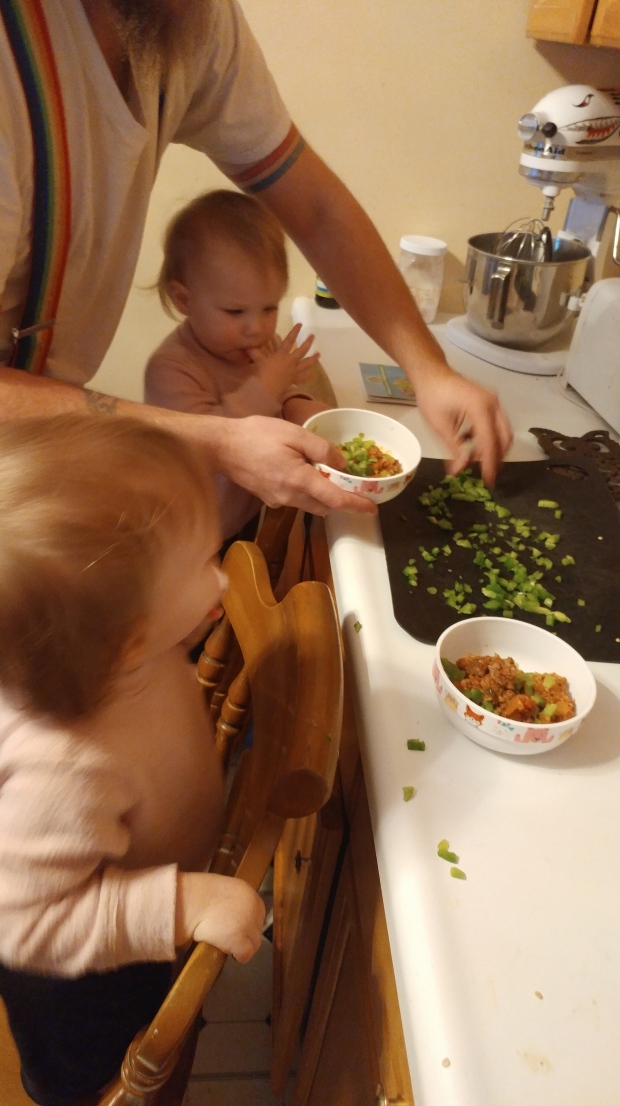 My most successful trick, is my most stressful. Have them help at the cutting board. My girls were 19 months when we started doing this. They decided I needed to hold them every time I even looked at the stove. And this was my answer, to let them help. Which turned into them eating more veggies than ever.  It seems to not really matter what it is, if it’s on my cutting board they will take a bite out of every thing. Would you like some zucchini for dinner? Sure thing, but my girls will take one bite each out every single zucchini. Are they going to eat the amazing cheesy zucchini that every one talks about when I make it for them? Oh hell no. But they are eating it off the cutting board. So that’s good enough. And it’s raw, so it’s better for them anyway.

How about letting them build their plates off of the counter that you were just cutting on? That is what my picture is of. They ate a bite out of every ones stuffed pepper, before I stuffed them. One of them they had ripped, so I diced it. And they are filling their bowls with peppers. They also loved talking about the peppers. Mean while when my son was 7 I still had to call them “bells” or he would freak out.

Which is another good point. Change the name of what it is called. Bells, for bell peppers for my son. My mom had to call hot dogs ‘cold dogs’, because I was afraid I would burn myself on them. My son hated my taco’s but loved the schools ‘tacodiles’ which were just taco’s laying down.

Let them spice their food.  Which means you might have to clean your spices every now and then. I’ve had my favorite seasoning dropped in eggs and heavy whipping cream more times than I can count. A spice I have to order online. ..

Grow a garden. I imagine from a very small stature is must be amazing to eat a giant tomato off a bush the same height as you. But it’s also very fun to get to grow that bush. Water it. Be part of it.  I can’t wait to have a garden with the girls this year.  My son used to love having his friends come over and try our herbs.  I loved it too. It’s always funny to see kids faces eating leaves off of plants. Hell, my mom did it to one of my friends. He was 27 and she told him we had a basil tree. He was so excited to see a basil tree. He ate a leaf and told her it was amazing, he later told me he couldn’t believe he fell for it.

Give them a plate of food. But also have the same thing cut up on your plate too. When they don’t want their food start giving them “your” food.  I cooked the worst steak I have both ever made, and ever tasted the other day. And the twins ate every single bite of it off my plate. I don’t know if it was the flavor of the worst steak ever or if it was just that it was on my plate! But they ate more steak in that one sitting than they have eating in their whole lives combined.

While they are cooking let them pick what food you put in theirs. I suppose it goes along with letting them build their plate. But maybe not. I mean, I’m not going to eat what weird stuff they pick.. But they will..  Silly babies!!

Put it on a pizza. My son would eat any thing. ANY THING. on a pizza.

More than just getting your babies to eat veggies. These tips and idea’s are also a great idea for building a happy home.  Keeping your kids  involved in cooking. For us, cooking is such a big part of our lives. It’s also how I escape from my kids. But with the size of my house, escaping twin toddlers is going to be impossible with out duct tape or leashes.   It is also some thing that helps children feel accomplished. My son…. oh god my son… is the most confident child you will ever meet. And he loves the feeling of having a plate of food he just cooked. He was writing “cock books” (misspelled cook) when he was 5.